While it’s true that use of components similar to modern concrete can be traced back over 3300 years, the science behind its design and application is ever-evolving. Viewed from this perspective, you could reasonably argue that concrete construction ranks among the most technologically-advanced building methods.

To truly understand how far concrete science has come, let’s start by taking a brief look back at the history of concrete construction. It begins around 1300 B.C., when the Bedouin tribes of the Middle East took the first steps toward modern construction by building homes supported by rubble walls and concrete floors, and featuring subterranean concrete cisterns. They began by coating their structures with burned limestone, which they discovered would harden when exposed to the air. This early form of cement was later advanced by introducing fine silica sand to make the final coating waterproof, thus allowing them to store water and thrive in the harsh desert environment.

While cement plays an important role in the history of concrete construction, it’s important to differentiate it from actual concrete. Cement is actually a component of modern concrete, with the introduction of other composites being required to help make the concrete capable of offering unique performance characteristics customization to each job. 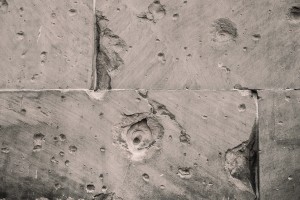 The Egyptians furthered the use of concrete-like materials in the building of the pyramids, using over 500,000 tons of mortar in the construction of the Great Pyramid at Giza alone. At the same time and over half a world away, the Chinese were also supporting their structures with a uniquely-designed mortar that incorporated rice. However, it wasn’t until the Romans began to conquer and establish settlements throughout Europe, Africa and the Middle East that modern concrete construction began to proliferate world. In fact, the fall of the Roman Empire set modern building strategies back for nearly a millennia. It was only through the discovery of ancient Roman manuscripts in the early 1400s that the use of concrete began in earnest once again.

The cement mixtures used in concrete continued to evolve throughout the Renaissance and even into the early 1900s until a standard was established for the composition of modern cement in 1913. Today, concrete continues to be a primary building material used in the construction of:

If you have a concrete paving project coming up or have some questions about how we put in sidewalks and ADA ramps give us a call! Integrity Paving and Coatings is an Austin owned Asphalt and Concrete Paving Contractor in business since 2007 with an A+ BBB rating.

You can find more information about our services here. For a free on site estimate and site evaluation fill out our contact form or call 844-PAVETEX.

How Many Handicapped Parking Spaces Are Required?

Anytime a business or organization is building a publicly accessible parking lot, it is important…

The Benefits of a Professional Concrete and Asphalt Paving Company

Do you own a house, condo or other commercial building in Central Texas? Are you…

How to Choose a Concrete Contractor

Recent Posts
Recent Testimonials
Schedule your free, on-site consultation and estimate today! Call Integrity Paving & Coatings at 512-853-9009 or get your quote online.
FREE Quote
©2022 Integrity Pavings and Coatings, LLC | All Rights Reserved | Branded With Kulture
Back To Top
Get a Free Quote